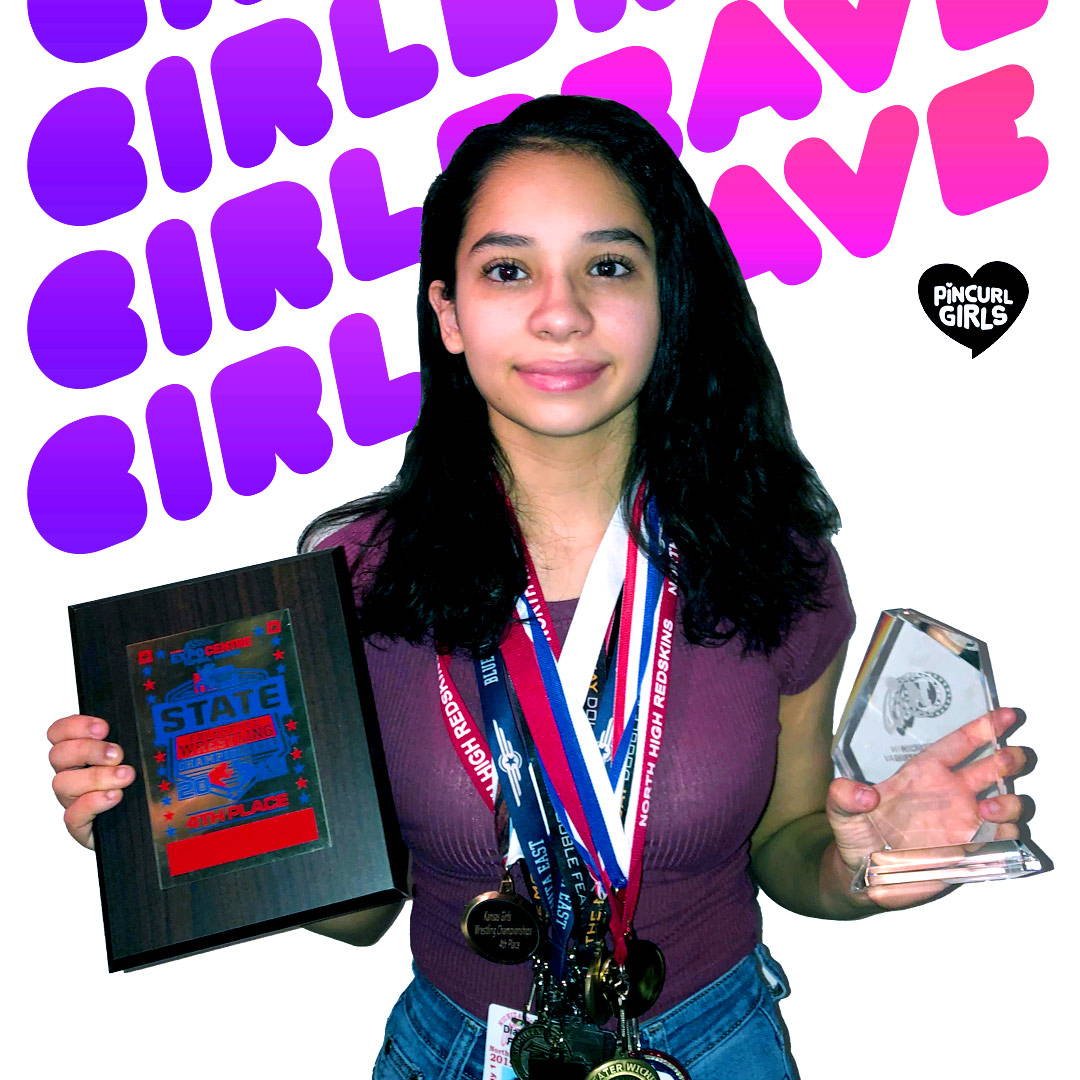 "Going into high school I never really did a sport when I was younger, and so I wanted to do a sport."

I am Jen Landis, founder of Pincurl Girls, and this is the GIRLBRAVE podcast. A few weeks ago The Greater Wichita Athletic League (GWAL) put on its first girls wrestling championship.So of course, I wanted to talk to one of those girls! Today, I’m excited to talk to one of the champions from that event, 16 years old, Dialeen. She never played any sports before and she decided she wanted to join the wrestling team. Full of nerves it was so hard to even get herself to walk down the hallway to practice. She was just awarded most improved athlete on her team! Dialeen shares her tricks on how she gets into the headspace she needs to compete at this level. So let’s get to it!

So, hi Dialeen, how are you today?

Nervous? Don't be nervous, this will be fun. I'm excited to talk to you. I found out about you through a newspaper article about the sport of wrestling. So I'm excited that you're here today. Tell me, how old are you? And what greater you in?

And you started wrestling as a freshman, I hear.  What attracted you to the sport?

Um, going into high school I never really did a sport when I was younger, and so I wanted to do a sport. So that was an idea that was already in my head. And typically, I couldn't really It was too late for me to do, like, cost cross country in like those sports.

And honestly, I was too short to do basketball. And so I thought wrestling would be a fun alternative as well and wrestling didn't have tryouts. So I just thought it would be the best choice.

Were you nervous at all to start?

Oh, absolutely. I hated remembering dreading the wall to the wrestling room after school just because I was so nervous and I didn't have anyone that was going with me.

How did you get through that? What did you say to yourself to just keep on taking those steps to the hallway? How?

Don't know. It was more like once I get there, the sooner I can leave.

That's great. So what was it like wrestling? Did you start wrestling with just the boys or were the girls that were wrestling as well?

There was other girls that were wrestling as well, but I was the youngest, as like, a freshman. And so we had, like two sophomores and two seniors, and three of them were higher weight class than me. And so we typically didn't wrestle. But then one of them did so I wasn't just wrestling boys, but I did wrestle them.

It was fun. It was fun. Obviously, they felt a little weird when, like wrestling a girl. And But then, once you get over that hump, it just started being just like another opponent. And I grew really close relationships with, especially with all the boys that I wrestled as well as the girls that started coming in.

That's great. So you guys were like a family.

"Stand up for what you want to do an anything like sports related, just do whatever you want to do, whether or not you're gonna face adversity or pushback from other people."

So did you get any pushback from your friends or family or any of the other guys when you first started wrestling?

Um, yeah, yeah. Um, a lot of my friends didn't think I was wrestling, and they thought I was just like a manager until I showed them like the bruises from, like this, constantly shooting and wrestling.

And my mom obviously didn't want me to get her. And so she was a little hesitant with me joining wrestling. But obviously she wanted me to do whatever I wanted to make me happy.

And, like, the boys were always a little iffy about girls, especially since they had to wrestle them and they typically didn't, they haven't men exposed to, like wrestling that type of, like person, like a girl.

And I'm pretty sure my coaches hated me just because I kept constantly throwing up. My freshman year was just terrible because I had a really bad, like stomach bug and a sinus infection. I was sick constantly, but somehow I was able to just pull through for the whole season.

Wow, that sounds terrible. You've got a lot of drive to keep going. What made you stick with it?

When you're doing a sport and what you fall in love with it and you want to continue it and like that happened to me in my sophomore year, seeing like all these new girls coming in and me actually be able to like you know, like, beat them. And so that made me want to, like, continue and keep going.

What advice did you did you give to those girls coming in? Did you have any advice?

Yeah, I did. I was just saying just keep with it, keep with that. You might ..you're, you're going to lose. Obviously, that's completely true. Especially if you're beginning your wrestling boys who are typically stronger than you. And and some of them might even have more experience. So I'm just I just told him to keep with it, and sooner, sooner or later you're going to win, and then you're going to fall in love with this sport.

That definitely that advice could go for almost anything when we start new things it's not gonna be great beginning, but sticking with it, you'll get better. It will be more fun.

You were voted the most improved wrestler on your team was that a goal that you set out to accomplish?

Um, how did it happened? It just happened. Somehow. I actually thought one of the new girls we're going to get it just because she was really good coming out and Then, once he started listing off of like characteristics that described me, I realized that I was going. I was getting it.

And so I guess I just got it my, like just staying with it because my freshman year I barely won anything. And then by my by the end of my sophmore year I had a running winning record, which is decent. It was a close winning record, but it was still a winning record. And so, like, I guess that's why I got it.

That's great do you remember what words your coach described about you before he told you you were the winner?

I don't exactly remember it by think, I remember he mentioned when I was saying about not wrestling and how he told me to give it another shot. And then he was like she started to... she ...I don't know. She was..she started to get better and improved, and I am almost everything.

Yeah, that's awesome. I also know that you were the champion in your weight class for GWAL. What did that feel like?

Um, it's so amazing. I feel like all the hard work had paid off and, like I had the most support I could ever ask to like achieve this point, especially with all my coaches and then my team who supported me the whole way.

And so how do you mentally prepare for a big match like that?

I get really bad nerves before, and I start doubting myself. So typically, I usually listen to, like, calming music before and obviously a warm up. I warm up by just pacing and just calming my thoughts breathing, taking deep breaths, bringing it out and typically I usually at least get a good laugh. And before I go out just because you wanna have fun with the sport and you can't have fun if you're taking it too seriously. So being able to laugh and have fun with it just makes everything worth it and help me prepare.

How do you give yourself a good laugh?

I usually, um, sometimes I tell my coaches to tell me a joke before or I'd tell my teammates, or I just talked to my teammates and they just come up with, like, a random thing that just makes me laugh hard.

Have you used those types of exercises on other parts of your life when you when you're nervous about trying something?

Yeah, state breath, calming music, obviously taking it not too seriously but seriously enough to like to get to achieve what you want to.

Yeah. Yeah. What advice would you give a young teen girl who perhaps maybe is a freshman who's interested in a sports that's perceived as a male sport? What would you tell her?

Just go for it. Usually you're not the only one doing it, so So you're not going to be alone. And even if you are the only one, the coaches and your teammates will support you even if they're a little hesitant to, so just go for it. If you want to do it, you should do it.

Yeah, If your teammates are a little hesitant do you have anything that you recommend, like saying to them to kind of get them over that hump like I'm just like anybody else here.

I mean, yeah, you and just say like, you didn't start talking to them not being as closed off as a freshman. I was extremely shy, so I wasn't like as close as soon as my teammates, as I want to want it to be. But I realized that if your teammates are hesitant, you should just start talking to at least one of them and that would open up to like more people wanting to talk to you and then more people wanting to see you succeed.

Yeah, yeah, kind of having to make that first initial move and break in the ice with one person, at least, and then it helps the rest. 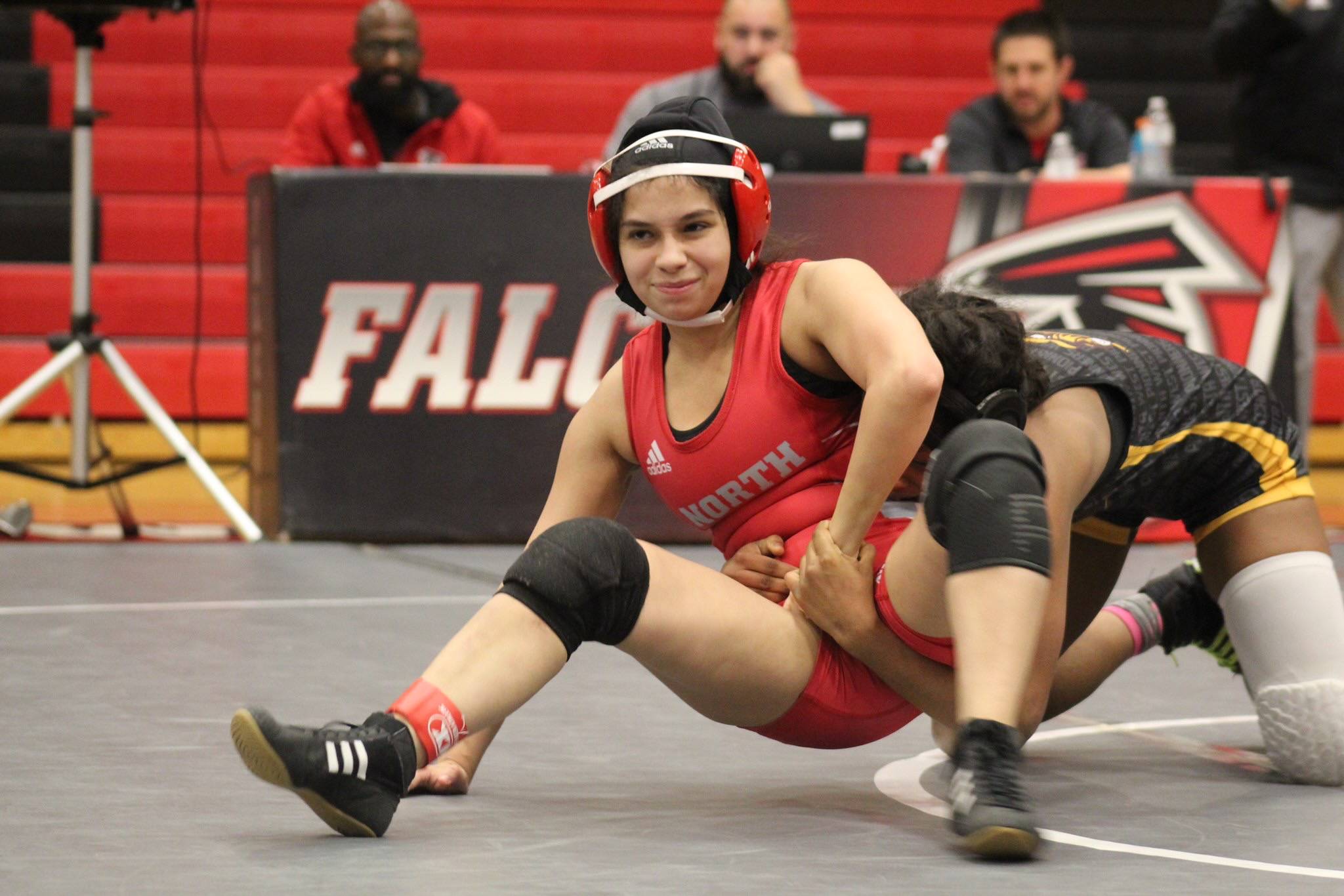 This podcast is called GIRLBRAVE. What's your definition of being brave? And do you think you are brave?

Um, my definition of being brave is just... it's like...stand up for what you want to do an anything like sports related, just do whatever you want to do, whether or not you're gonna face adversity or pushback from other people. Um, I would like to say that I'm brave, especially my freshman year, but I don't know. Brave is such a general description then it's hard to like, see yourself as brave.

Well, looking from the outside in, you seem very brave to me. What else do you enjoy doing outside of wrestling?

That's great. I love hearing that. Well, this has been so great. Thank you so much for being here today and sharing your story. And I wish you all the best in the future.

Thank you. You too.

What does it mean? To be brave sometimes break me scared or anxious but trying anyway. GIRLBRAVE is a celebration of girls who are brave taking up space in the world and claiming it. Thanks for listening. Join us next time on GIRLBRAVE podcast.

Liquid error: product form must be given a product